WHAT THIS ARTICLE is ABOUT

Two thirds of adult Brits don’t have a will. To ‘die intestate’ is to expire without one. That could be a terrible mistake, not least because the majority of the legislation which determines how assets are apportioned when there’s no will is almost a century old. So it doesn’t reflect the reality and complexity of many modern relationships. And, even if the law had changed with the times, you might well be horrified at the consequences of not sitting down to think about your legacy.

The UK’s RECENT and SIGNIFICANT SURGE in UNEXPECTED DEATHS

For anyone who wants to attempt to calculate the likelihood of their own death sometime soon then the Office for National Statistics has a wonderful resource at www.ons.gov.uk/peoplepopulationandcommunity/birthsdeathsandmarriages/deaths/datasets/deathsregisteredinenglandandwalesseriesdrreferencetables (this is the last set of data available, as I write, for 2017). But the truth is that most of those in graveyards had little intimation of their impending demise.

And, actually, our ability to predict death is getting worse and not better. In March 2018 ‘The Independent’ reported that ‘10,000 more people than expected died at the beginning of the year in the UK – and no one really knows why’. See www.independent.co.uk/voices/england-wales-mortality-health-medicine-nhs-death-rate-a8256931.html. This is bad news indeed. Clearly it’s not bad news for me. Or you since you’re reading this. Yet it’s bad news for anyone who was amongst those 10,000 people. And their friends and relatives. Not just because of the loss of life. But because many of those who are not expecting to die won’t have left a will when they unexpectedly did. 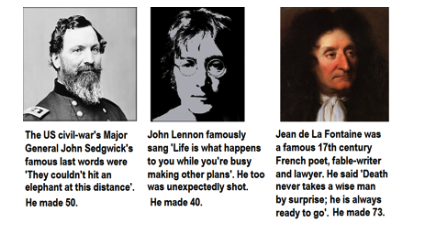 WHY PLAN on an UNCERTAIN LIFE but NOT on a CERTAIN DEATH?

None of us wants to be a doom-monger. Yet it is a sad fact that we’re all doomed. And, though we all plan meticulously for an uncertain life we often neglect to plan for a certain death. Interestingly even the Office of National Statistics has no data on precisely how many UK residents die intestate (leaving no will). See www.ons.gov.uk/aboutus/transparencyandgovernance/freedomofinformationfoi/deathsintestate. But it’s a lot. The Financial Times thinks it’s about two-thirds of us (see www.ft.com/content/81212cfe-4322-11e4-8a43-00144feabdc0; it cites research by Investec Wealth & Investment).

We’d all like to think that those we leave behind would sort it out if we haven’t organised a will. But here are just a few examples of the current intestacy rules:

Of course it is always possible that the situation might be complicated by adoptive, fostered or illegitimate children. These possible beneficiaries could include people you care for – or would care for had you been aware of their existence.

More to the point, the sad fact is that those around you may not behave well after you’ve passed away. They may not respect your wishes if those wishes are not recorded in a will. And, in your absence, they may well not respect each other.

This is not scaremongering. The British Government’s advice is to be found at www.gov.uk/inherits-someone-dies-without-will and you’ll see that this takes you on a step-through guide to what would probably happen if you died intestate. It begins by sending you down separate trails according to whether you’re resident in England and Wales or Scotland or Northern Ireland.

There is a pecking-order if there’s no will. In England and Wales that’s governed by The Administration of Estates Act (1925). And the pecking-order’s something like this:

In any event any party that inherits may well be left to deal with any unsettled liabilities that you’ve racked up. And any such entitlement is sometimes going to be contentious, something that could further deplete whatever you leave behind.

THIS is IF YOU DIE INTESTATE. YET WITH a WILL YOUR WISHES SHOULD be RESPECTED

With a will you at least set out, for the record, what you want. Though you should remember that a will can be challenged. If you want to leave everything to your cat, and nothing to your wife or kids, then your sanity or fairness might be questioned. And on that basis your will could be overturned.

You can write your own will, a voluntary declaration, and have it signed by two witnesses who are not – and could not be – amongst the beneficiaries. But if there is any complication, any chance of your wishes being unclear, or any chance that the situation might change in some way either after your will has been written or after your death, then it is worth asking professional Estate Planners to help you.

This website uses cookies to improve your experience while you navigate through the website. Out of these cookies, the cookies that are categorized as necessary are stored on your browser as they are essential for the working of basic functionalities of the website. We also use third-party cookies that help us analyze and understand how you use this website. These cookies will be stored in your browser only with your consent. You also have the option to opt-out of these cookies. But opting out of some of these cookies may have an effect on your browsing experience.
Necessary Always Enabled
Necessary cookies are absolutely essential for the website to function properly. This category only includes cookies that ensures basic functionalities and security features of the website. These cookies do not store any personal information.
Non-necessary
Any cookies that may not be particularly necessary for the website to function and is used specifically to collect user personal data via analytics, ads, other embedded contents are termed as non-necessary cookies. It is mandatory to procure user consent prior to running these cookies on your website.
SAVE & ACCEPT